This is quite a scary step to start a blog as a Shabby Chic furniture painter who finds it nearly impossible to even write a letter as I am so rubbish at writing anything. However, I really wanted to show you my summer holiday back home to the south-west of France as I feel that it is a part of the world that is not so well known or even advertised and having travelled extensively and lived abroad I think there is no-where that is as special. Let’s see if u think the same!

I will be frequently if not daily updating my blog so you can really feel like you are there with me! I will be visiting many villages and vintage markets which should be of some interest to those of you who are also upcyclers like me. Of course I cannot wait for the wine and amazing food either (my diet will be on hold for 2mths).

For those of you who don’t know me let me introduce myself!

I am a brit or rather half of one as my mum is english and father french. I grew up in the Dordogne in a small village called Monsac near Bergerac (famous for the story of Cyrano de Bergerac or the remake movie Roxanne in 1987) for the first 9 years of my life. 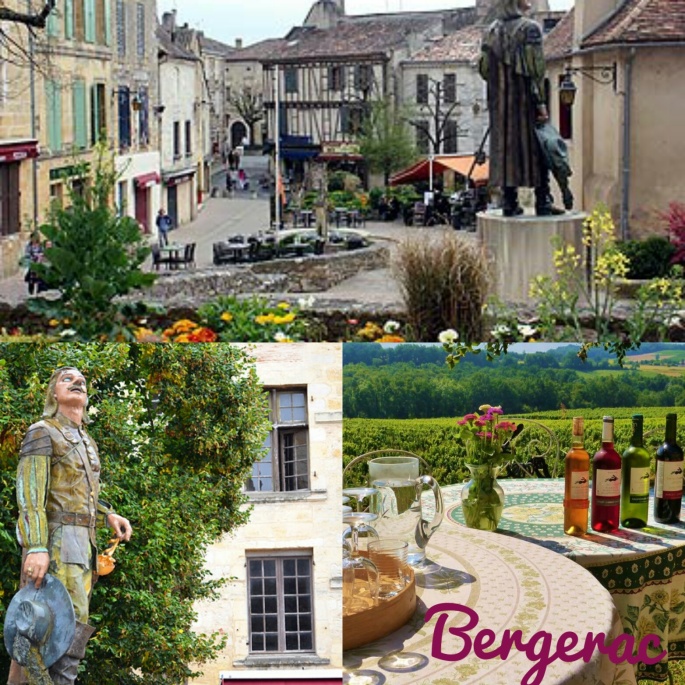 My mother moved back to the UK after that and left my father behind which was very hard for me. Saying goodbye at 9yrs old to your daddy and leaving the beautiful countryside which I thought no-one on the outside world knew even existed but me.

At the age of 24 I met the love of my life when I was working in Paris and of all things he was British (lucky me) and then the rest is history! We moved to 3 countries ( USA, Belgium and Cyprus ) for his work, had 2 children and then finally moved back to UK after 13 years abroad!

Now this is where my Shabby Chic life begins!

We moved to a cute little market town in Buckinghamshire called Buckingham which is near Milton Keynes.

I was looking for work but it was nearly impossible since I had been abroad for nearly 12 years. A stranger in my own country feeling very un-welcome. Buckingham held a market once a week and that is when I was inspired! I saw a lady selling some chairs that had been painted very shabbily (not sure it is a word) and she was asking for quite a lot. I then asked around and found out what this trend was, upcycling secondhand furniture and turning it into a profit with a little chalk paint! I could not believe this was such a craze but I strangely liked the rustic look as it reminded me of my home in France. The paint in France is not that great so it is always chipping off. I thought to myself -Is this something I can do? As a teenager my mum would let me paint huge murals on the walls and sometimes paint our furniture so I knew that painting was in my blood and I loved it but did not ever think of it as a potential money earner! 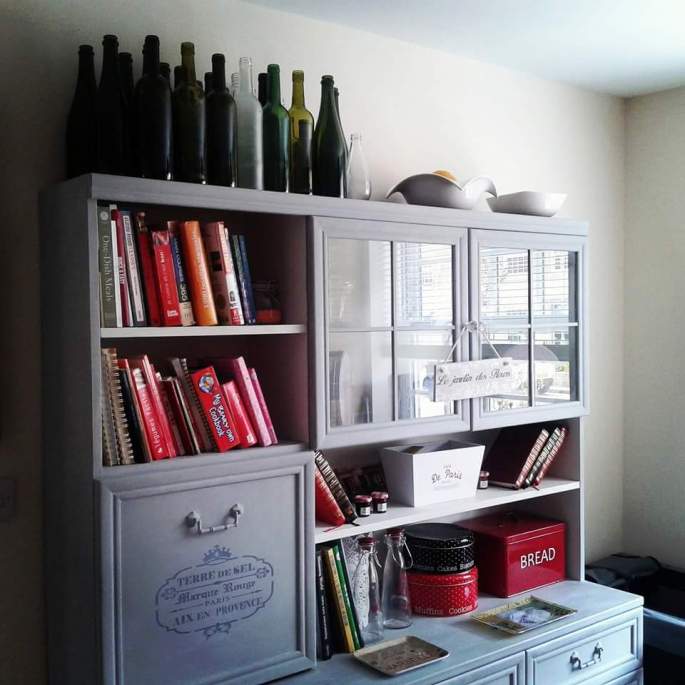 I then tried it out. Bought my first piece, a dresser and painted it in Annie Sloan chalk paint. It sold within 2 weeks and that was it! I was hooked, obsessed, addicted! This was it! This was my calling! This is what I was always meant to do! I always hated working in a office wasting my life away staring at a screen arriving in the dark and going home in the dark. There had to be more to life..

You see, I believe there are two types of people in this world, the intellectual and the artist. We are all different and we are all given a talent. Parents need to spot that talent and encourage their child to pursue it in life as this is what they will succeed at and end up loving all their life. When I had to choose my GCSE’s, I desperately wanted to take art but my mum told me it was a waste of time and pushed me towards languages so I took german. Did I pass german? No. Have I ever used german? No

I wonder what would have happened to my life if I had taken Art! Well I probably wouldn’t have waited till I was nearly 40 to start an artistic career!

Anyway, after I sold my first piece and many others I decided to take the plunge and start my dream. Rustique c’est chic was born.

After a couple of months, we moved to Amman, Jordan and that is when my dream truly took off! 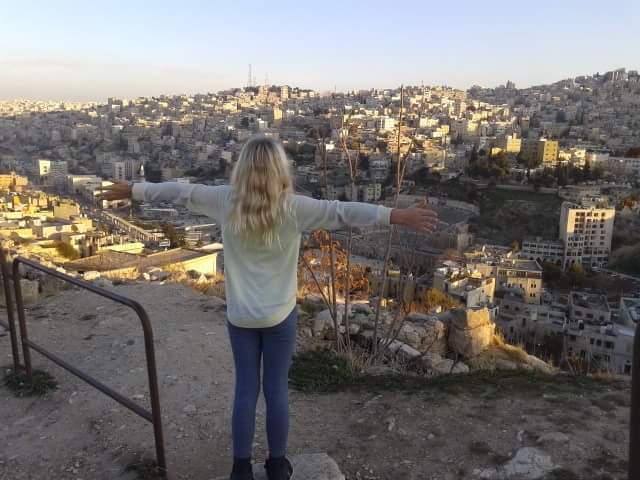 It was a challenge to introduce Shabby Chic to a country that had never heard of it or even sold chalk paint. I luckily brought my own with me from the UK and managed to make it last until we left Jordan 18mths later. I did many custom orders and sold my smaller items in a popular handmade shop called Shams shop in the Abdoun area. I will do a separate blog later all about my time in Jordan. I was so busy near the end that I was literally painting the day before I left!
I am now in Pretoria, South Africa starting all over again. Luckily for me chalk painting is already a craze so at least I do not have the job of educating people about shabby chic and why repainting an old piece and distressing it to make it look rustic is actually beautiful😂😂

Although we have been to Tuscany Italy several times over the years, the main reason for this trip was to finally show our daughter Siena where her name came from. We have been in Siena twice before and loved it. Most people visiting Tuscany prefer Florence as their must see city. We do not like crowds and fighting with groups of tourists so Siena became our new preference. It is slightly quieter but still a large city. The old city is made up of cute little streets filled with the usual bars, restaurants and shops but it has kept it’s history and one can still imagine living there in medieval times. You can still find some streets where you are totally alone.

All streets lead to the Piazza del Campo which is the main square. We tried to reach it twice on this holiday but we were defeated. Check previous blogs for details. As this was the last day of our Italian trip, we had to give it one more shot. 3rd time lucky as the saying goes. How could we leave Italy without showing Sienna SIENA?

Well, funnily enough we managed to find parking right in Piazza del Campo carpark which was impossible before. Still had to walk a bit but this was the closest place to park.

Here is a video of us entering the square and Sienna seeing it for the first time. 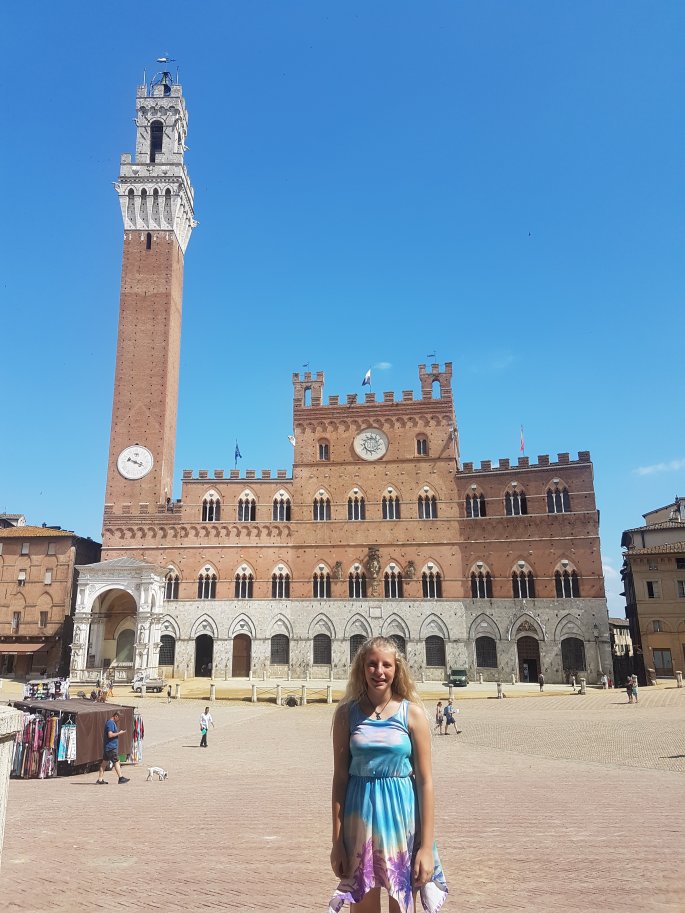 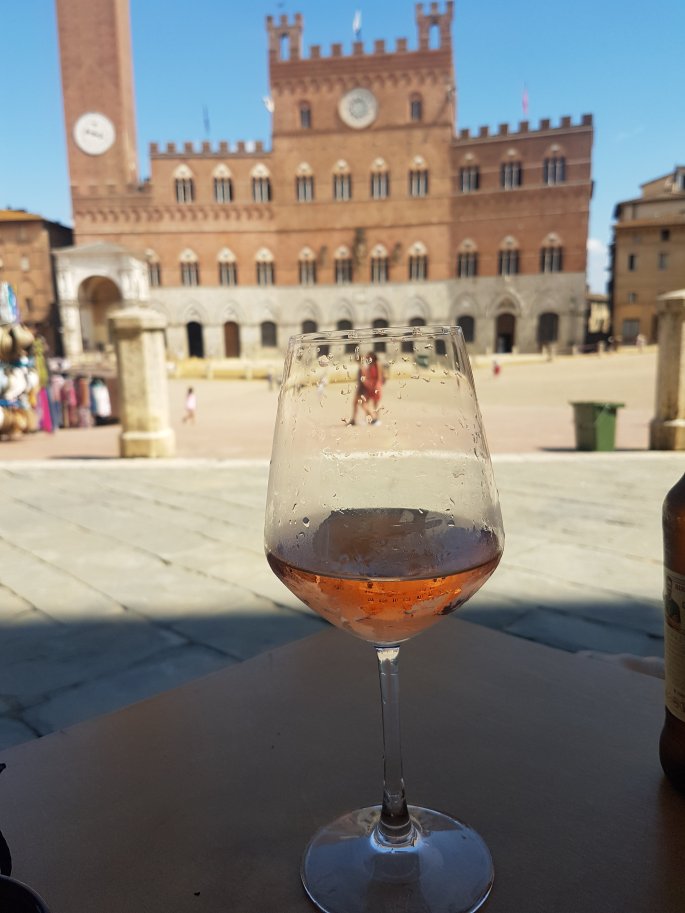 Flags of the provinces who took part in the Palio. 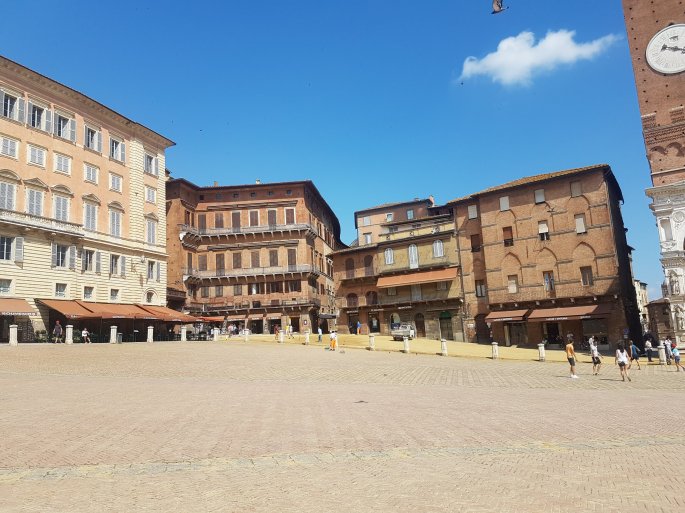 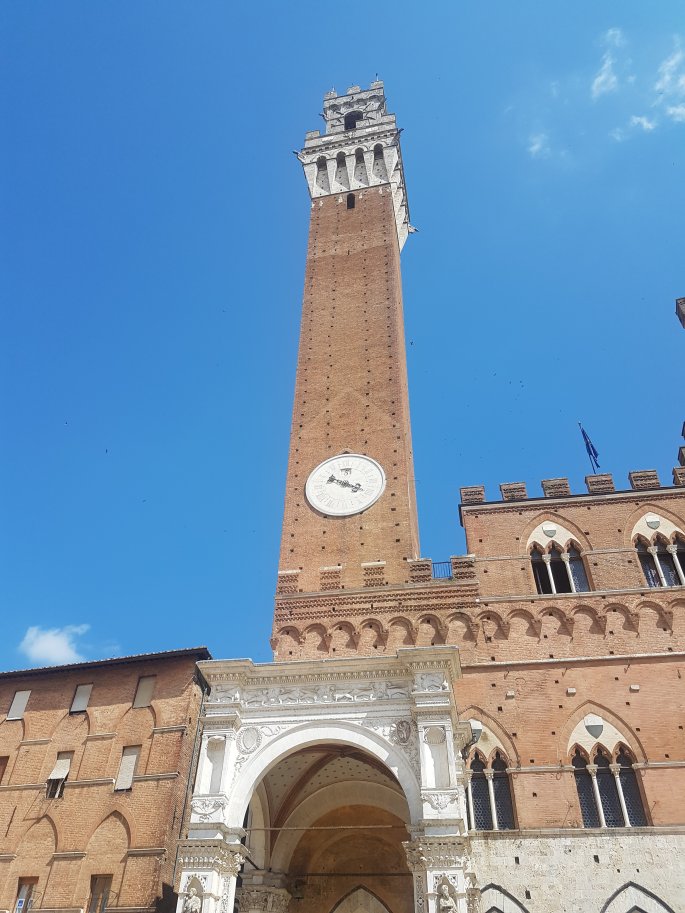 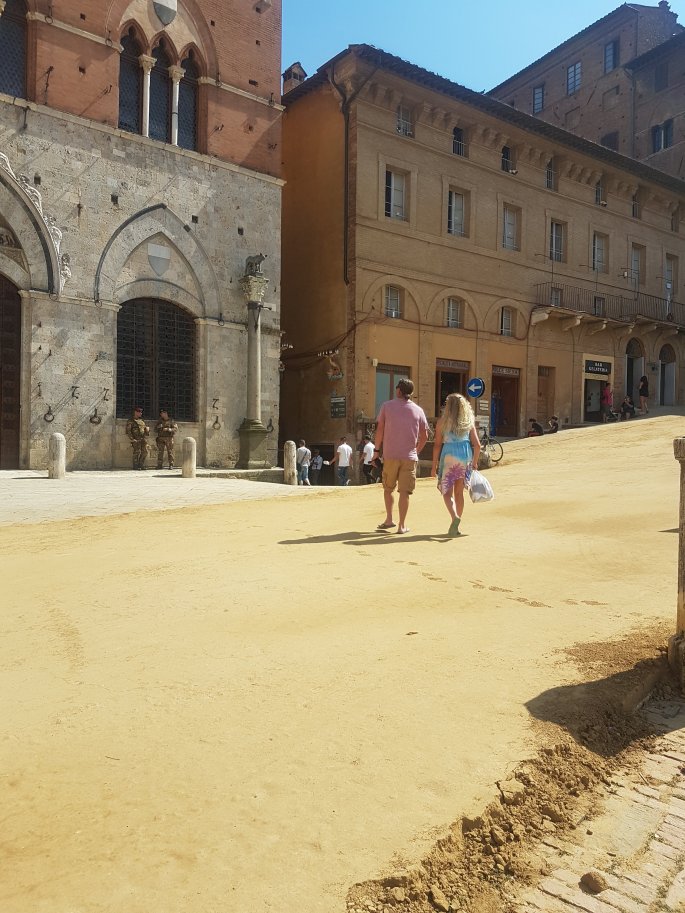 The sand still on the ground from the Palio horse race. 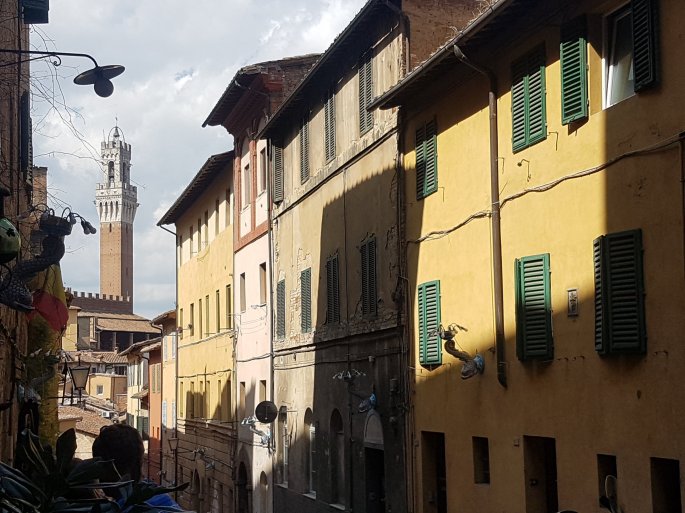 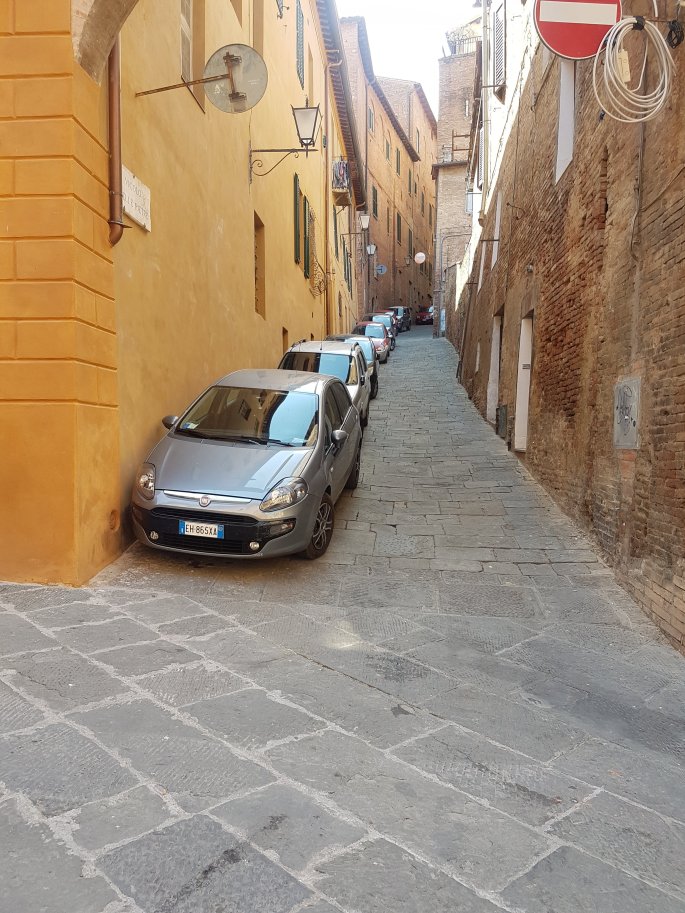 Check out how close to the wall they have to park. 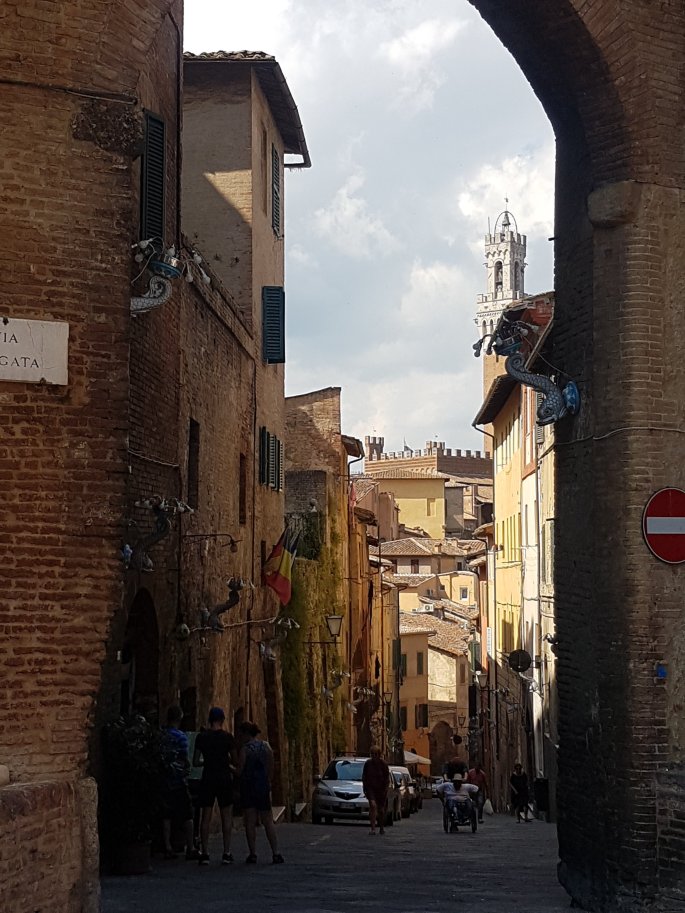 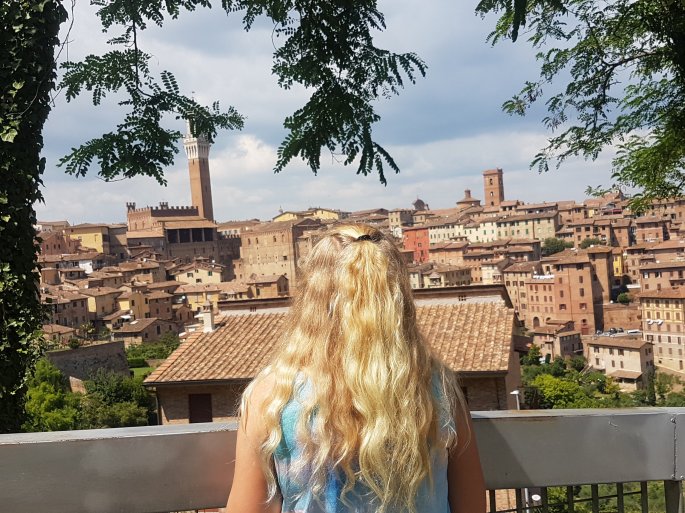 Next blog – France – Rennes-le- Chateau. If you are a fan of the Da Vinci Code check this link out to swat up on the story of this sleepy little hamlet.